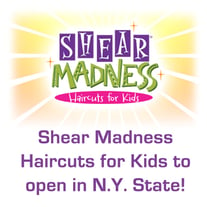 Based in Overland Park, Kansas, Shear Madness Franchising announced the signing of an Area Development Agreement to open multiple locations in New York State, Pittsburg, PA and Cleveland Ohio. The agreement allows for multiple locations to be developed over a number of years. Danni Development, LLC of Williamsville, NY reached the agreement with Shear Madness Franchising in late April. “We are excited to bring Shear Madness Haircuts for Kids to the East coast,” said Todd Danni, Managing Partner. “We feel like Shear Madness has a unique business model and we look forward to expanding the concept in the northeast.”

“We are excited about partnering with Danni Development, LLC and look forward to our relationship going forward,” commented Janon Otto, CEO and Director of Operations for Shear Madness Franchising. “As Todd brings a wealth of experience and a solid business background in developing businesses, the agreement has great synergies for both sides. With franchise locations mostly located in the midwestern part of the United States, Shear Madness believes it’s the right time to enter new markets. Furthermore, as part of our overall strategy, we wanted to establish ourselves in the Midwest and make sure that we could support and grow our Midwest based franchise partners before expanding nationally,” commented Otto.

THE MATERIALS ON THIS WEBSITE REGARDING THE SHEAR MADNESS FRANCHISE OPPORTUNITY ARE FOR GENERAL INFORMATION ONLY AND ARE NOT INTENDED TO BE THE OFFER OF A FRANCHISE TO ANYONE ACCESSING THIS SITE. OFFERS AND SALES OF A FRANCHISE ARE MADE ONLY AFTER THE DELIVERY OF AN EFFECTIVE FRANCHISE DISCLOSURE DOCUMENT IN COMPLIANCE WITH APPLICABLE FEDERAL AND STATE LAW.

THIS FRANCHISE IS NOT BEING OFFERED TO RESIDENTS OF THE FOLLOWING STATES: CONNECTICUT, HAWAII, ILLINOIS, INDIANA, KENTUCKY, MARYLAND, MICHIGAN, NORTH DAKOTA, RHODE ISLAND, SOUTH DAKOTA, UTAH, VIRGINIA, WASHINGTON AND WISCONSIN. THIS COMMUNICATION IS NOT DIRECTED TO ANY PERSON IN THE STATES LISTED ABOVE BY OR ON BEHALF OF THE FRANCHISOR OR ANYONE ACTING WITH THE FRANCHISOR'S KNOWLEDGE. NO FRANCHISES CAN BE OFFERED OR SOLD IN THE STATES LISTED ABOVE UNTIL THE OFFERING HAS BEEN REGISTERED AND DECLARED EFFECTIVE BY THE APPROPRIATE REGULATORY AUTHORITY AND THE FRANCHISE DISCLOSURE DOCUMENT HAS BEEN DELIVERED TO THE OFFEREE BEFORE THE SALE WITHIN THE APPLICABLE TIME FRAME. THIS FRANCHISE IS OFFERED ONLY BY DELIVERY OF A FRANCHISE DISCLOSURE DOCUMENT.

THESE FRANCHISES HAVE BEEN REGISTERED UNDER THE FRANCHISE INVESTMENT LAW OF THE STATE OF CALIFORNIA. SUCH REGISTRATION DOES NOT CONSTITUTE APPROVAL, RECOMMENDATION OR ENDORSEMENT BY THE COMMISSIONER OF BUSINESS OVERSIGHT NOR A FINDING BY THE COMMISSIONER THAT THE INFORMATION PROVIDED HEREIN IS TRUE, COMPLETE AND NOT MISLEADING.

This franchise is offered only by delivery of a franchise disclosure document.